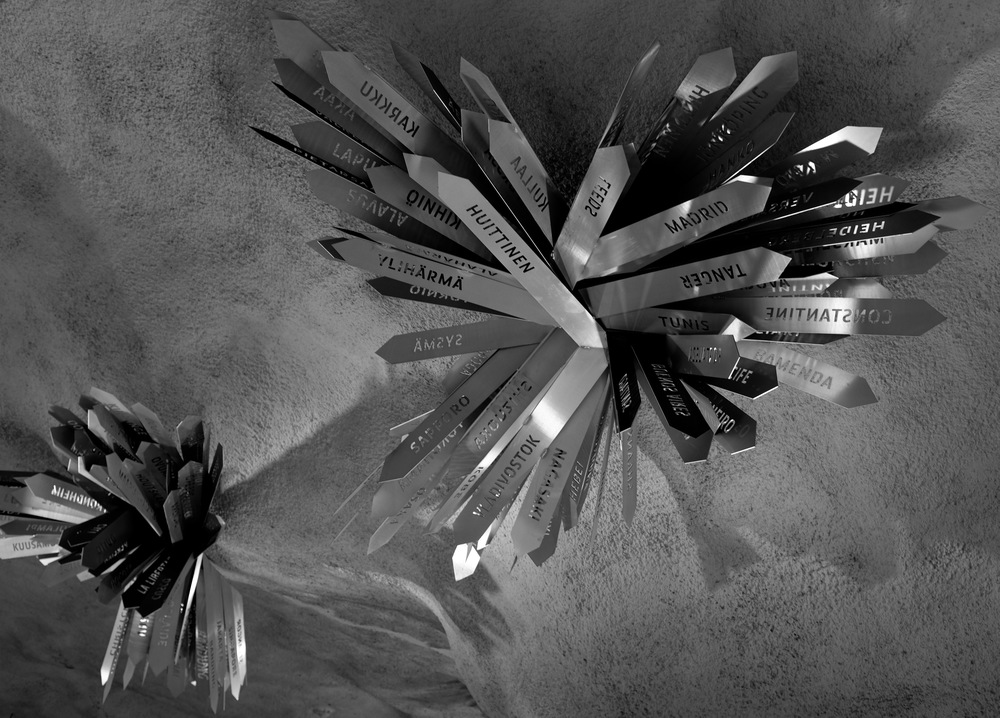 Reaktor, a local IT consulting company, recently posted a programming puzzle called Reaktor Orbital Challenge. You’re given a starting point and an end point on the globe and the locations for a bunch of communication satellites. The task is to find a route from the starting point to the end point via the satellites. Preferably the route should be the shortest possible one. The satellites and the ground stations can only communicate if they have a line-of-sight.

An Oculus Rift was drawn between the participants. This generated some buzz among the Finnish programming community. I especially enjoyed the low-effort solutions like copy-pasting the coordinates to Google Maps and eyeballing the route.

I have a bit of a love/hate relation with this kind of recruitment puzzles: I wouldn’t want to spend time on them, but they nerd-snipe me so easily. Therefore I decided to aim for a low-effort solution that still finds the shortest path. Let me tell you about it.

I wrote my solution in Clojure and used the graph library Loom, the linear algebra library core.matrix and the utility library potpuri. You can find the full source here.

Finding the shortest route is an instance of the well-known problem of finding the shortest path between two nodes in a weighted graph. Satellites are the nodes and they’re connected if they can see each other. The weight of an edge is the distance between satellites. The ground stations need to be included as well.

There are so few satellites that you do not need to do anything clever - using a standard algorithm would be fine performance-wise. I looked up graph libraries for Clojure and decided to go with Loom, which has an implementation of Dijkstra’s algorithm.

The locations are given in longitude/latitude/altitude coordinates. I realized that you could do the calculations in this coordinate system, but I didn’t know how to do it and I didn’t know if it would be easy (turns out it is). Converting to the Euclidean coordinates is easy and I knew how to work with them, so that’s what I did.

How do you build the graph, then? Calculating the weight is easy, we can just use the Euclidean distance of the points. All that is left is to check that the points can see each other. As we will see below, it’s not very hard either.

Initially I did the coordinate transform the same way as I’ve done it since I was 15 years old: by looking up rotation matrices and multiplying them. Later I realized I should’ve looked up this thing instead. The problem statement says that Earth is a perfect sphere with the radius of 6371 km. Thus in Wikipedia’s formulas, $N(\phi) = 6371\ \textrm{km}$ and $e = 0$. In Clojure:

I chose to represent x-y-z vectors as three-element Clojure vectors. This is both concise and understood by core.matrix.

When doing this conversion, you have to fix the origin and the directions for the Euclidean axes. I did it the “obvious” way:

When looking the formulas up, I learned that this way has a name. It’s called Earth-Centered, Earth-Fixed coordinate system.

Next, we have two satellites and the Earth. How do we know if the satellites can see each other and that the Earth is not between them?

I always think about the distance between a line and a point as projecting the point to the line. It was quick to write the required calculations and I even got them right on the first try! The vector operations are kindly provided by core.matrix.

I’m not going to bore you with the parsing code. I parsed the input into a map like this:

Now all that is needed is a sequence of edges and weights for Loom:

Our work here is done.

For the full solution, see my gist. It took me 80 lines of Clojure and about an hour, so the effort was sufficiently low.

Unlike me, Jouni Seppänen knows how to do the calculations in the spherical coordinates. I recommend checking out his Python solution.