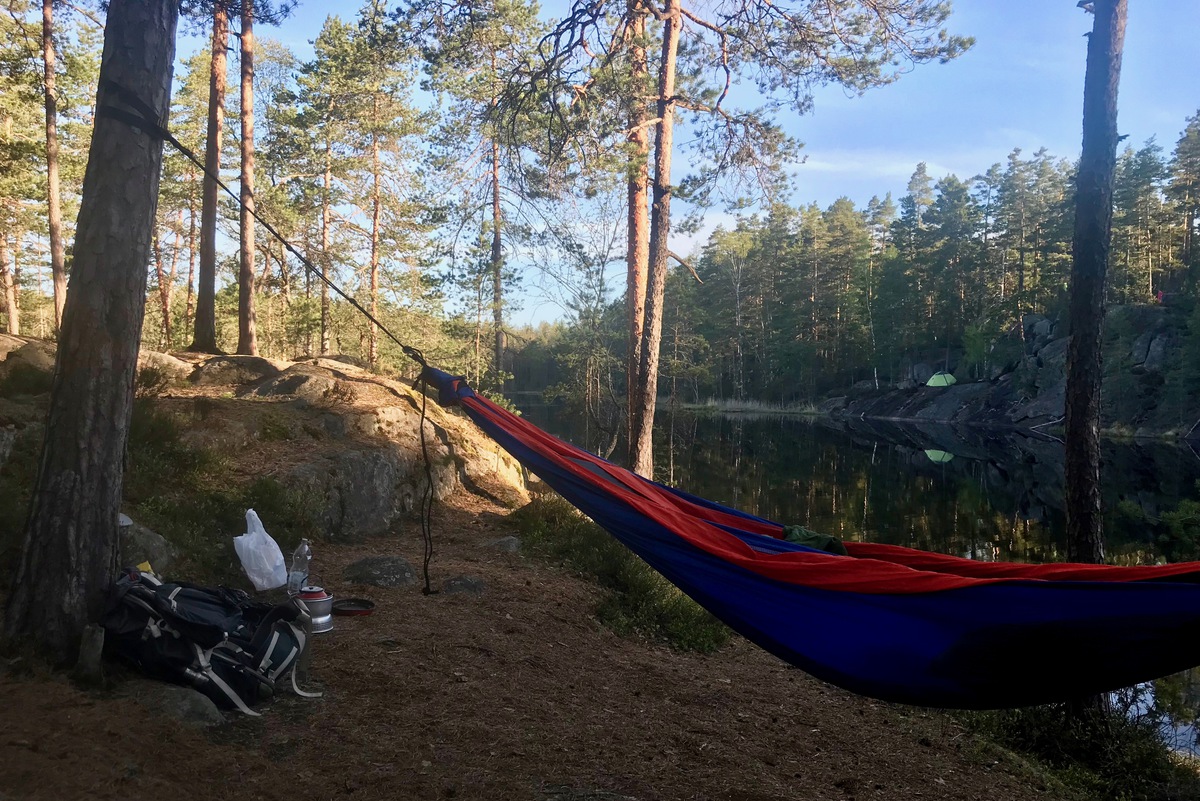 Last summer, inspired by Rich Hickey and the general trends, I bought a hammock. I didn’t end up using it much: I only slept half a night in it. I had pitched it in the attic of a summer cottage, but there was no sleeping pad or underquilt. Even indoors the convection was so bad that my butt froze. I spent the rest of night in a bed.

Still, I wanted to get a full night’s sleep in the hammock outdoors! I don’t have a tarp and the EN13537 lower limit for my sleeping bag is 9 degrees Celsius (basically it’s a summer-only sleeping bag) so the weather would need to be perfect: warm, no rain, not too much wind.

Last weekend, the weather forecast promised exactly that! The night temperature would be balmy 8 degrees Celsius, the sky would be clear and there wouldn’t be any wind. I’ve never spent a night alone in the forest, but it was time to cross that off my bucket list.

I left home in the evening and after taking a metro, a train, and a bus, and hiking a couple of kilometers, I arrived to the northern Iso-Holma campsite in Nuuksio. It was already past eight o’clock and the sun would set at 21:48. I set up my hammock by the nice little lake and cooked some dinner.

Turns out that the a Trangia lid (at least a one that got bent) sucks for frying eggs. The eggs is stick to it and cook unevenly. I forgot the spatula home and the one I improvised from a piece of wood sucked as well. A lesson learned for the next time: either bring a spatula or learn to carve.

After the dinner, I settled in the hammock to read and to listen to the birds. There were cuckoos, woodpeckers, and woodcocks. I heard some raptors that I couldn’t identify and a black grouse, which I haven’t recognized before! A couple of whooper swans visited the lake, but luckily they didn’t spend the night there – they were extremely loud. And in the morning I heard what must have been a fox. All in all, it was a pretty good night for observing wildlife by ear.

Camping in Nuuksio on a warm spring weekend is not exactly a unique idea. In the national park, you’re only allowed to camp on the designated camping sites and each one I passed was full of people. I’m not sure if it counts as being alone when there are dozen tents in your vicinity. In addition to the birds, I got to listen to a computer science student praising CS and weed on the other side of the lake.

Sleeping in the hammock was… okay. While I didn’t freeze, my sleeping bag was clearly a bit too cold for the weather. They say that you should sleep in a slight angle in the hammock to avoid the banana shape. It was hard to get the inflatable sleeping pad nicely in that angle, so I ended up as a banana anyway. Next time I will try a foam pad – it’s more practical anyway.

Still, it was cool to sleep under the stars1. I’ve always felt that you have to have a tent to sleep in the forest, but that’s just not true.